My dear friend Lisa Chan of Gripping Yarns showed me some of the basics of spinning with a supported spindle a couple years ago. She’s a wood turner who makes her own, and it was exciting to learn a new skill from her using one of her spindles. Here’s Lisa herself, demonstrating how to use the spindle:

I played with it for a while, and enjoyed it, but wasn’t getting the results I was looking for, my spinning was a bit too inconsistent. I put it aside, and kept meaning to go back to it and give it another go, but then got distracted by other things.

I was at Weaving Works recently and after picking out some yarns I needed I started to dawdle around the fiber for spinning and felting. Some really pretty Meriboo (70% merino, 30% bamboo) caught my eye—it was really soft, and had a lovely sheen. 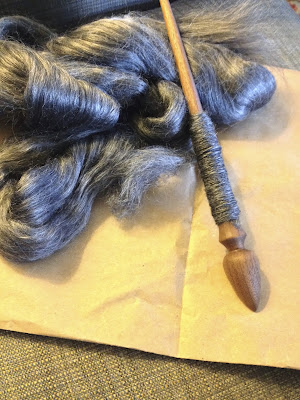 When I showed it to my husband later it creeped him out just a bit. He said it looked like human hair to him. Which I got immediately, but to me it had the color and sheen of a dark, shiny pencil mark on a piece of paper. The sample of yarn spun from it at the shop was a soft charcoal grey and had the same shimmer present in the fiber. There were 2 shades of grey there. I bought the rest of the fiber they had in the darker shade, and figured I’d give it a shot.

The spinning went a lot easier than I’d thought it would. I still struggled with making it even—sometimes it was a fair amount thinner than I’d like, other times it was a bit too thick. But I got to the point where the variation was mild enough that it’d make a usable yarn. 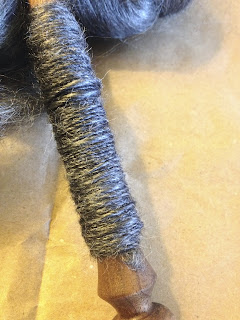 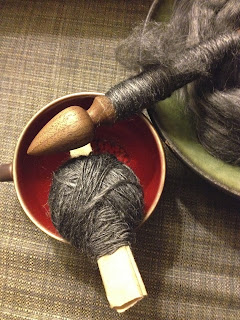 As I continued spinning I decided I wanted to make a hat out of the yarn. The simple rib thank you hat from the Purl Bee looked like it would be pretty and easy—and would require the least amount of yarn. But I was pretty sure I didn’t have enough fiber in the dark meriboo to make a hat—they’d only had .6 ounces of it left and I bought all of that color that they’d had. So couple days later I went back to Weaving Works and bought the rest of their meriboo in the lighter grey—I think it ended up being about 1.3 ounces or so. I had a decent amount of the darker fiber spun up already, and thought I’d try spinning the rest in a combo with some of the lighter grey, and then spin up the rest of the light grey fiber separately. Then I’d knit the bottom half of the hat in the dark grey, move into the “half and half” spun yarn, and finish off with the light grey yarn—hopefully making a hat with a slightly ombre effect.

Combining the fibers together was kinda tricky, especially with my novice spinning skills. But I muddled through okay, and then spun up the rest of the light grey on its own.

The next step was plying. Plying involves taking 2 singles, or yarns that I spun, and twisting them together. Lisa loaned me one of her drop spindles a while back, and I used it to ply the yarn together, using this technique:

It was a tad tricky at first, but once I got the hang of it the plying went pretty quickly. 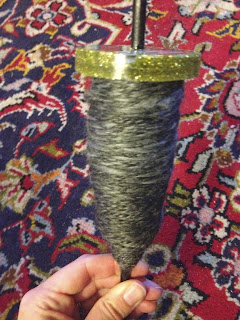 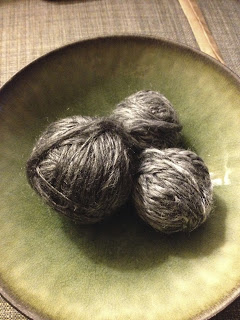 Once I had the yarn spun and plied, the next step was figuring out what size needle to use. So I knit a few swatches: 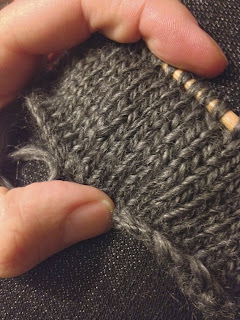 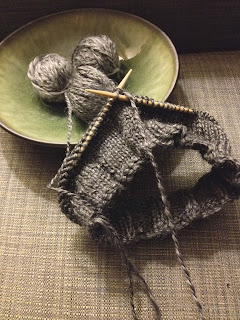 And then unraveled ‘em (I needed every inch of yarn I’d spun) and started knitting the hat using size 6 needles. Because the pattern was very, very simple, I was able to pay attention to the yarn itself, watching for any irregularities in its thickness in case it became an issue as I knit. 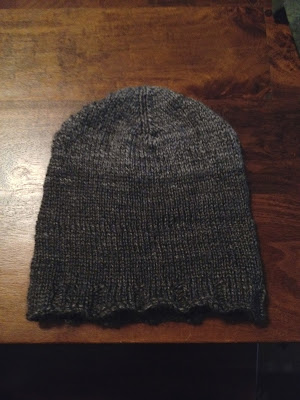 Fortunately that didn’t end up becoming a noticeable problem and I ended up with a soft and very functional hat. I’m really pleased with the way it turned out and will definitely be spinning more for more complicated and interesting hats and garments in the future. 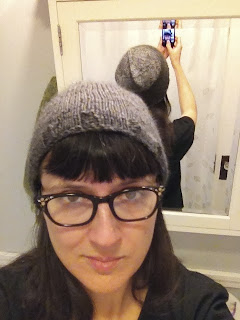 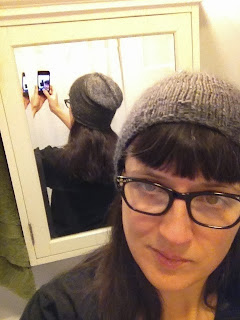 Right now I’m working with tussah silk, making a much finer yarn. It’s a trickier fiber to work with, a lot stiffer, and has a fair amount of barklike matter that needs to be picked out as I spin it. But the beautiful golden sheen it has makes all the effort worthwhile. 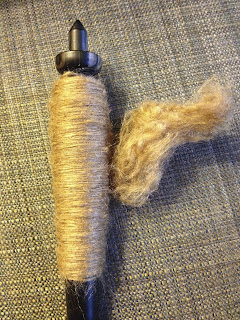 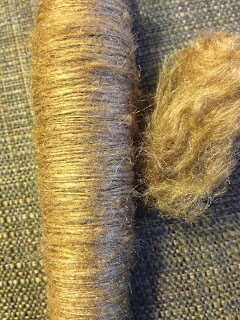 I’ll probably make a shawl or scarf out of it—it’ll depend on how much yardage I can get out of it once it’s plied. We shall see how it goes.

Posted by Rachel at 3:37 PM No comments: