I took a solo trip to Ireland about 17 years ago. I had several places I wanted to hit on that trip--the Guinness brewery, the town of Ballyheigue in County Kerry where one of my great grandmothers was born... 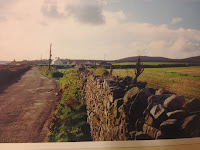 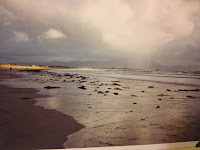 And the Aran Islands. I also wanted to pick up a few souvenirs, including an Aran sweater. 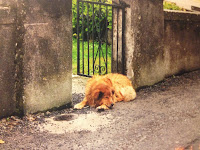 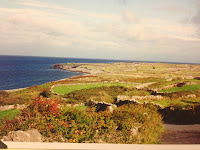 I found a small store on Inishmore that sold some sweaters. Most of them were huge, but I found one the looked like it'd fit, even thought it was on the bulky side. It was hand knit, a pretty cornflower blue with several intricate patterns. Unfortunately I never took a picture of the sweater in its original state, but here’s a picture of some of the original pattern: 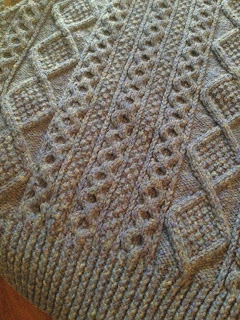 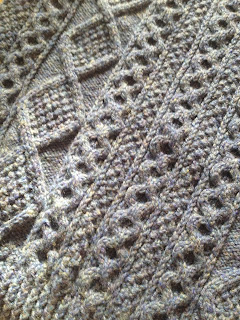 Unfortunately once I got it home I realized the fit was bulky and totally unflattering. I probably wore it once. The rest of the time it sat in a plastic bin under my bed with my other bulky sweaters. I'd look at it every once in a while and try it on, hoping that somehow the fit would be different, but it never ended up being more flattering.

Once I started knitting I toyed with the idea of unraveling the sweater and using the yarn for something else. I balked at the idea of ripping it apart, but if I never wore it, what was the point of keeping it?

I held off on giving it serious thought until I found a pattern that seemed to be worth ripping it apart over. After ruminating over a few possibilities over the years that never seemed *quite* worthwhile, I finally found Berocco's Aidez sweater.

Pretty, isn't it? The reviews I read said it was a relatively easy knit. After deliberating for a week I finally separated the pieces of the sweater and unraveled them into balls.

A user on Ravelry.com had converted the pattern from pieces that all had to be seamed together to something that have the body knit in the round, with the sleeves joined to the body and then the rest of it also knit in one piece. After some swatching I picked a needle size and went at it. It was a relatively quick knit, until I got to the collar. The same user recommended knitting it separately and sewing it on. I chickened out on that--as I'd never done separate collar extensions that then had to be sewn on before. That’s one of my major obstacles in knitting—I dither around for quite a while when confronted with a new technique, and this time was no different. I put the sweater in a paper grocery bag and tucked it aside.

Fast forward almost a year later (lame, I know) during a cold snap in Seattle (below 30F, I know a lot of the rest of the country would throw snowballs at me for complaining) I finally pulled the thing out, read the directions for knitting and attaching the collar, and got working on it. I realized partway in that I'd have to knit a longer collar, as there were issues that were created by knitting the sweater in the round instead of in pieces that would make it necessary to make a longer collar. But I muddled on through, and sewed the collar to the body of the sweater without too much trouble.

Afterwards I soaked it in Euclan, a detergent that doesn't require the garment to be rinsed. I'd suspected when unravelling the original sweater that it hadn't been washed or blocked, and once I pulled it out and felt the texture of the yarn change and soften, I knew I'd been right. Good thing too, as blocking it makes it harder (although not impossible) to unravel a garment after the fact.

I laid it on a towel, stretched it a bit to make the cables open up, and let it dry for about 24 hours. I wove in all the ends and tried it on. 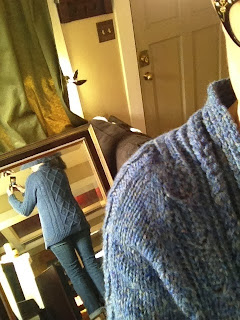 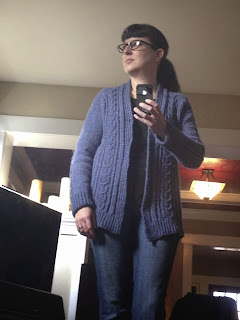 It's a pretty good fit! A tad long, but that suits the style of the sweater. I have a short torso, so that's often an issue with sweater patterns for me. Next time I'll try to bear that in mind when knitting from a pattern. But I'm really pleased with it, and it's very comfortable to wear.

I still have a whole front of the sweater that I didn't unravel. I’m thinking I might try to make a fair isle vest out of it, depending on what other colors seem workable for me, and which pattern I choose.